Promotions, pay rises honours - how the key players in the Kelly scandal were rewarded

by Jonathan Oliver, Mail on Sunday

The politicians and officials at the heart of the David Kelly scandal have been showered with honours, promotions or lucrative retirement jobs in the three years since the scientist's death.

While the Kelly family continue to mourn quietly in private, The Mail on Sunday today reveals how the men and women who share the blame for his demise have prospered.

On the eve of the third anniversary of the Hutton Report into the affair, an investigation charts the upward career paths of figures central to the inquiry who were called to give evidence or played a major part from behind the scenes.

The senior officials accused of covering up No10's manipulation of the intelligence on Iraq's weapons of mass destruction have gone on to be rewarded with some of the most glamorous jobs in the public sector.

Meanwhile, the Labour chairmen of the Commons committees that failed to probe the bogus Government dossiers on Saddam Hussein have been placed in the House of Lords.

And Alastair Campbell, the spin doctor whom critics accuse of tampering with intelligence and whipping up the hysteria that led to the scientist's alleged suicide, now stands to make an estimated £1 million from his memoirs.

Even junior and middle-ranking officials who were caught up in the political tornado have been recognised by the honours system and given significant promotions.
The research was carried out by Liberal Democrat MP Norman Baker, who is probing the circumstances surrounding the death of Dr Kelly in July 2003.

Mr Baker said: "Nobody in Government came out of this episode with any credit or integrity. Yet, three years after the Hutton Inquiry, the principal players in the drama of the death of David Kelly - those who backed the Government or cravenly caved in to No10's demands - have prospered handsomely."

Meanwhile, the men who stood up to the Establishment have not fared so well.
In 2003, Kevin Marsh was the editor of Radio 4's Today Programme and defended his reporter Andrew Gilligan's right to report that Campbell had "sexed up" the WMD dossier. Now he is stuck in a relative backwater as head of the BBC's journalist training school.

Greg Dyke, then BBC director general, was forced to quit following the Hutton Report and has struggled to find a new role.

And what of Lord Hutton? The ex-Law Lord, accused of colluding in an Establishment whitewash, has slipped back into obscure retirement in his native Northern Ireland and has said little on the affair. Last month he defended his report in an article for a legal journal.

Sir Joe French, 57, was Chief of Defence Intelligence.
Salary: up to £95,000.
Role: Testified before Hutton, defending the notorious - now disproved - claim that Saddam's weapons could be launched within 45 minutes.
Now: Promoted this year to Commander-in-Chief of RAF Strike Command on £154,000 a year.

Ann Taylor, 59, Labour MP, was chairwoman of Parliament's Intelligence Committee.
Salary: £56,000.
Role: She headed the committee that published a report which exonerated Downing Street over allegations of manipulating the Iraq intelligence.
Now: Ennobled as Baroness Taylor of Bolton. In her first year in the Lords she claimed more than £30,000 in tax-free "subsistence allowances".

Donald Anderson, 67, was Labour chairman of the Foreign Affairs Select Committee.
Salary: £56,000.
Role: Caved in to Government request not to ask David Kelly awkward questions about Iraq's WMD. Kelly was found dead two days after he appeared before Anderson's committee.
Now: Elevated to Lords as Baron Anderson of Swansea. Claimed £25,000 last year in tax-free attendance allowances in return for attending Lords on a total of 94 days.

Geoff Hoon, 53, was Defence Secretary.
Salary: £129,000.
Role: Accused of neglecting his duty of care towards MoD employee David Kelly by sanctioning the release of his name to the media. Hoon admitted he could have done more to help the scientist.
Now: Demoted to Europe Minister on £99,000 but considered lucky to keep his Government job. Insiders claim Blair decided against sacking him because of the Iraq secrets he could spill.

Godric Smith, 41, was one of the Prime Minister's two Official Spokesmen.
Salary: £80,000.
Role: Announced Kelly's death to reporters on the PM's plane as it arrived in Tokyo - responsible for many subsequent briefings.
Now: Honoured with CBE. Sports-mad Smith landed dream job as chief spin doctor for the 2012 London Olympics. Paid £120,000 a year.

Alastair Campbell, 49, was Blair's Director of Communications and Strategy.
Salary: £130,000.
Role: Allegedly masterminded the "sexing up" of the official report on Iraq's WMD, author of the second so-called "dodgy dossier", and was the man behind the strategy that led to the public naming of David Kelly.
Now: Quit No10 but new work more lucrative. Charged Labour £40,000 plus VAT for a few weeks as a consultant during 2005 Election. Sports writer for Rupert Murdoch's Times newspaper. Stands to make £1 million for his memoirs.

The PM's other spokesman

Sir John Scarlett, 58, was chairman of Whitehall's Joint Intelligence Committee.
Salary: £130,000.
Role: Accused of acting as "human shield" for Alastair Campbell. Scarlett insisted he had "overall charge and responsibility" of the Iraq intelligence report - No 10 had not meddled.
Now: Promoted in 2005 to the most glamorous job in British intelligence: Chief of MI6. Known as "C". Salary up to £200,000.

Martin Howard, 52, was Deputy Chief of Defence Intelligence.
Salary: £90,000.
Role: Insisted Downing Street had no knowledge that 45-minute claim was wrong.
Now: Still at MoD as Director General of Operational Policy on a salary of £100,000.

The Chief of Staff

Julian Miller, 51, was Chief of the Intelligence Assessment Staff, Cabinet Office.
Salary: £80,000.
Role: Defended Alastair Campbell, suggested David Kelly was too junior to have had access to crucial intelligence.
Now: Made Companion of the Order of the Bath. Director-General of Resources and Plans in the MoD on £100,000.

Lee Hughes, late 40s, was Secretary to the Hutton Inquiry.
Salary: £50,000.
Role: Managed day-to-day logistics of the hearing.
Now: Made CBE. Promoted to senior role in Department of Constitutional Affairs, on £60,000.

Kate Wilson, late 30s, was chief Press officer at MoD.
Salary: £50,000.
Role: Responsible for strategy that led to Kelly's "outing". Journalists were told in advance that if they gave the correct name, the MoD would confirm it.
Now: Honoured with an OBE "in recognition of gallant and distinguished services in connection with operations in Iraq". Still chief Press officer at MoD. Salary around £60,000.

Sir David Manning, 57, was Tony Blair's chief foreign policy adviser.
Salary: £120,000.
Role: Present at all Downing Street sofa summits leading up to the war.
Now: Promoted to Washington Ambassador, the most sought-after job in the diplomatic service. The post comes with armoured Rolls-Royce and sprawling residence. Basic salary £130,000 plus tax-free allowances of £90,000.

Sir Kevin Tebbit, 60, was Permanent Under Secretary of State at MoD.
Salary: up to £264,250.
Role: Sir Kevin admitted "responsibility" but not "culpability" for Kelly's death.
Now: Enjoying comfortable semi-retirement as non-executive director of the Smiths Aerospace group on £60,000 a year and is also a visiting professor at Queen Mary College, London.

Sir Richard Dearlove, 61, was Chief of the Secret Intelligence Service - MI6.
Salary: up to £200,000.
Role: Insisted to Hutton he was not aware of any unhappiness within the intelligence community over the 45-minute claim.
Now: Living in genteel retirement as Master of Pembroke College, Cambridge, on Civil Service pension of up to £100,000.
Posted by Rowena Thursby at 3:56 PM 5 comments:

AN ARTICLE 'OF A POLITICAL NATURE' ARISING OUT NORMAN BAKER'S INVESTIGATIONS WILL BE PUBLISHED IN THE "MAIL ON SUNDAY" ON SUNDAY 10 DECEMBER........ 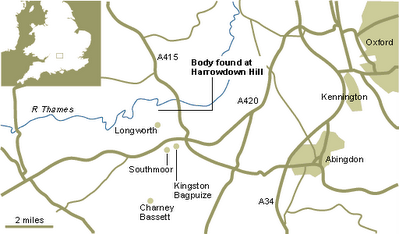 The investigation into Dr Kelly's death has reached a critical stage. This opportunity will not come again. Now is the time to come forward with potential leads. A person or persons living in Dr Kelly's locality (Southmoor/Longworth, Oxon) have left messages here (see below) anonymously. Please would anyone with local (or any other useful) information write, in confidence, either to me at:

or to Norman Baker MP at:

Keep up the good work. Ed Vaizey and Norman Baker have been busy, but it's not enough.

So the BBC are doing an hour-long programme in Jan, re. the David Kelly 'suicide' - that's sure to be an even bigger whitewash. The answers are right here, locally, on our door-steps but no-one will listen. Interview all those present, before his body was found, and immediately afterwards.
Someone is living with a huge lie on his conscience.

I knew David Kelly - he was a very clever but stubborn man, and I think the 'authorities' thought he knew too much for his own good. An independant Inquest should be called for, and an answer sought to the question 'who killed Dr David Kelly?' We (locals) didn't believe the stories in the papers, not for one second. This Government is trying to brain-wash us. Norman Baker MP, and Ed Vaizey MP, have voiced their thoughts, but who will listen? Who is in the position to call for an Inquest? In other words, what authoritative figure is there who isn't corrupt and is held in great esteem and total unbiased respect? Who is there?

Posted by Rowena Thursby at 6:48 AM 2 comments: